How do you know if you're killing someone? 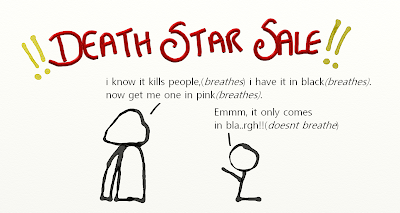 How do you know if you're killing someone? Sometimes it's easy, take Darth Vader- he's got a DEATH star with a super laser. Simples. Same goes for cigarette companies, they sell a pocket sized slice of cancer, they kill people. Easy peasy. But it's not always so straightforward. Take doctors. You'd think they'd be pretty freakin clear on whether they're killing people, right? It's got to be the first lesson, followed by other key classes like Perfecting Your 'Of Course You Fell On It' Face and How Not To Vom in Surgery.

It turns out its not so simples, as highlighted by a recent article in the New England Journal of Medicine (NEJM) http://www.nejm.org/doi/full/10.1056/NEJMoa1113354. The paper looked at the treatment of Idiopathic Pulmonary Fibrosis (IPF) a rare disease that causes scarring of the lungs. People with IPF become breathless, and many sufferers die from it. We don't know what causes IPF which makes it tough to treat. This study compared the safety and efficacy of a drug combination used widely in the US (azathioprine, prednisolone, N-acetylcysteine) with placebo. The study was stopped half way through because the group receiving the standard drug regime were more likely to be hospitalised and more likely to die than the placebo group. The doctors were killing people, and they didn't know it.

This is why evidence matters. This is why we can't just say trying something is better than nothing. Sometimes our desperation to help, to treat, to save, actually does more harm than good.

The NEJM study seems shocking today, but actually medicine has a strong history of doing things that aren't beneficial for patients. We used to prescribe mercury, bleed people and dissolve their brains with ethanol. Ooopsie. Sometimes I try and figure out what will seem mad about current day medicine to future generations. NHS funded homeopathic hospitals rank high on my list. In my optimistic moments I hope there will be fewer examples of the truly loopy, because evidence based medicine should weed out the harmful and the useless. Complementary medicine lacks this filter, which is why "Urine therapy" has a disturbingly large wikipedia entry...

What do you think? What will we look back on and go they did whaaaaaaat?
Posted by A little grey cell at 08:46