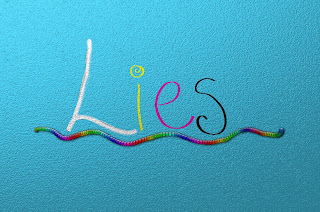 Do you tell lies? Anyone who says no, is a liar. We tell social lies to spare people's feelings- we say "your new haircut looks great" when we think "what in the hell happened to your head?! It looks like you gave a bad hair day picture of Baldrick to a blind, fingerless, unhinged baboon. Let me get you a paper bag with eye holes ..."

We accept these lies as the social glue which allows us to avoid anarchy. We call them white lies (which always amuses me and makes we wonder what a pink lie or a yellow lie is) to convey the idea that while they are lies, they are good lies, lite lies. But at the other end of the spectrum there are bad lies, we dont call them black lies but we definitely brand the people who tell them. Telling people your child is dying must rank pretty dark in the lie colour scheme. Telling this lie to people who really do have a dying child to get their sympathy must redefine the colour scheme. This is exactly what Abbie, a teenage girl, did on a Macmillan cancer support forum. She's not alone, other people have described painful accounts of battling diseases like HIV, anorexia, cancer and TB in online forums and blogs. Each one an in depth characterisation of how brutal these diseases can be. Each one recounting the physical and mental havoc they wreak. But not one of them true.

Yet, Abbie was suffering. Not for the reasons she gave, but I don't doubt for a second that she was suffering. Perhaps this was what made her character “Anna” so believable. Perhaps it was what helped her to extend support to others on the forum. Which ultimately is the entire purpose of these forums- to build relationships and support each other. Take Lauren who felt so moved by her friend 'Cara's' (fake) struggles she tattooed 'Cara' on her arm. Can a relationship that so moved Lauren be entirely fictitious? Surely relationships, especially those on the internet, are almost entirely defined by how people experience them. If Lauren felt supported and loved, and in turn she supported and loved 'Cara' wasnt the relationship a positive thing and the truth the real problem?

I think trust is the real problem. As anyone who has been cheated on by a partner or lied to by a friend knows, the thing that grabs your guts and twists them, is knowing that the person you made yourself vulnerable to wasn't truly opening themselves up to you. Without trust, relationships die.

This applies to every relationship- friends, family and the medical profession. It's why medics cant prescribe placebos even when they think the placebo effect might help a patient. Should the truth come out, as it tends to, the relationship is irrevocably damaged. And the damage can extend beyond that relationship, impacting on people's ability to trust others, making them less willing to open themselves up.

Yet Rebecca at Macmillans post notifying forum users of the fabrication was incredibly open, incredibly compassionate and wonderfully honest. Perhaps if we lived in a world where everyone showed the kind of compassion she did, people like Abbie and 'Cara' wouldn't feel the need to put a fake physical front to their real mental health problems. They wouldn't need a tale of cancer or HIV, they could be honest with us. We could trust them. Or perhaps not. But until we at least create the environment where they can be honest, we'll never know.

In the spirit of promoting mental health, lets end on something a bit easier on the brain: Kittens. All together now, awwwwwwwwwwww!
Posted by A little grey cell at 15:51