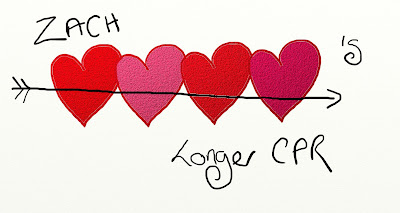 “Call it.” Two simple words, but they are the culmination of one of the toughest decisions a doctor can make- when to stop CPR. Too short and someone dies when they might have survived. Too long and you're cracking ribs, protracting death and perhaps starting a heart again when the mind has died. There are no guidelines on how long CPR should be performed, partly because it's a very difficult topic to study. Imagine trying to get ethics committee approval for randomly assigning people to long or short CPR. Doubtful. Thank God.


Some evidence on CPR does exist, largely from observational studies such as the one published in The Lancet last week by Goldberger et al. One of the biggest studies of its kind, they used the world's largest registry of in-hospital cardiac arrests, including 64,339 patients who suffered a cardiac arrest at 435 hospitals in the United States from 2000-2008. Their aims were to assess whether hospitals spend different amounts of time on resuscitation attempts and whether a hospital's typical resuscitation time affected survival rates.

The study divided the hospitals in to 4 groups according to the median time they spent on resuscitation efforts in non-survivors. This was used as a measure of the hospital's tendency for longer attempts. Just 9 minutes separated those in the shortest group (16min) from those in the longest (25min). But time wasn't the only thing that separated the hospitals. The study team found that patients in hospitals which spent the longest on resuscitation events were 12% more likely to survive and go home than patients in hospitals with the shortest attempts.

Intuitively this might seem obvious- the longer you try, the more people you save, right? As one reader of the Washington University newspage commented: "*face palms and shakes her head* Jesus Mary and Joseph, people are just so stupid. Seriously, this was not obvious to doctors before the study?"

Nope. As we discussed at the outset longer isn't necessarily better- the authors expected to find that longer attempts were futile, resulting in people being 'saved' with minimal brain function. Yet this wasn't borne out in the study- hospitals with longer CPR attempts did not have higher rates of neurologically impaired survivors, just higher rates of survivors.

This brings us to every enquiring mind's favourite question: why? Well, let's start with what the study team think. They note that the patients who benefited most from longer resuscitation times were those whose type of cardiac arrest was “non-shockable”, which means they weren't suitable for defibrillation. One example is “asystole” which looks like this on an ECG.

Note its got a bit of a wiggle to it, a perfectly “flatline” probably means your leads aren't connected, or you're in an episode of Casualty. In the UK, CPR guidelines advise against defibrillation in asystole. The study team suggest that in these non-shockable cases the extra time spent on CPR buys time for medics to figure out the underlying cause of the cardiac arrest and try to tackle it. In light of this, maybe CPR guidelines should state a minimum attempt time?

This seems reasonable, but that doesn't necessarily make it so. All this study has demonstrated is an association between the median duration of resuscitation attempts in non-survivors and post-CPR survival. This could be for other reasons- perhaps hospitals that deliver longer CPR also deliver more effective CPR or have more robust post-CPR care. Given these possible alternative explanations, this study alone isn't enough to justify a minimum CPR time for all. Goldberger himself agrees:

“The last thing we want is for the take-home message to be that everyone should have a long resuscitation”. A cardiologist with a-mazing glasses, a first author Lancet paper AND a recognition of the limitations of his research. No denying Zach's a catch ladies.

So, taking these limitations into account, what is the take home message? Reassurance. Reassurance that longer resuscitation times don't appear to lead to a significant increase in survivors with severe neurological damage. With this reassurance, hospitals whose resuscitation times are at the low end of the spectrum should seriously consider aiming to continue CPR for longer.

Whilst the timing of inpatient CPR timing will continue to be investigated and debated, its important to recognise this study is not applicable to people having CPR in the outside world. Just 15.4% of people in this study made it out of the hospital alive. This is because they were sick enough to be in the hospital in the first place. None of this data is transferable to when people have a cardiac arrest in the outside world. Should you ever find yourself in that situation, deciding when to stop CPR is far easier: DON'T. Unless:
For a CPR refresher, have a read of this and a look at this.